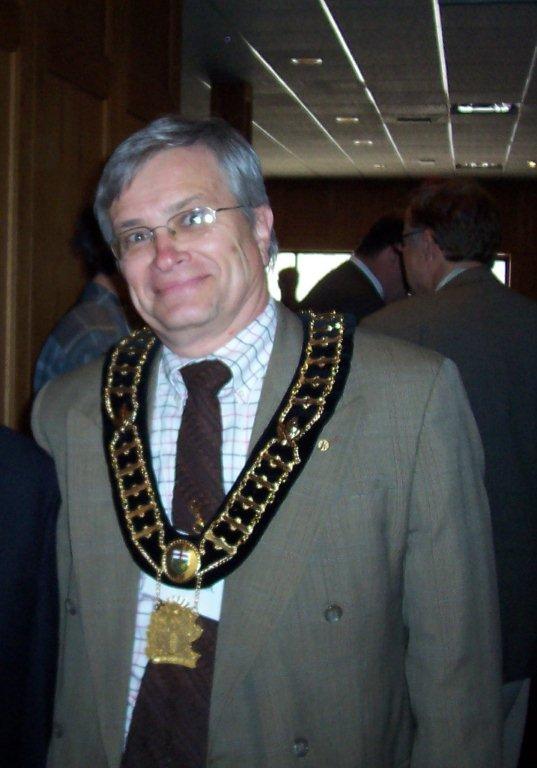 The Chain-of-Office of the Ontario Coroners Association is a visual reminder of the history of the Association founded in March, 1974.
The Chain-of-Office was created in April, 2005. Each link represents a two-year period during which one coroner in the province lead the Association as President. Two crests of the province of Ontario are positioned in the north and south poles of the chain. Two gold maple leaves are positioned in the east and west poles of the chain. The background is created from black velvet. The crest of the Ontario Coroner’s Association, in gold, hangs from the chain with the coroner’s motto "We speak for the dead to protect the living" engraved on the obverse.
The crest is made of four parts, three maple leaves as symbolized on the crest of the province; a trillium-the provincial floral emblem; a caduceus-symbolizing medicine and the balance of justice. The crest is topped with a crown and a spray of maple leaves adorns the left side.
The Chain-of-Office was designed to be worn at all meetings and functions where the President is acting in his or her official capacity. Examples would include but are not limited to the Spring Education Meeting, the spring banquet hosted by the Association, the Annual General Meeting of the Association and the banquet hosted by the Association at the fall education meeting sponsored by the Office of the Chief Coroner.
The Chain-of-Office symbolizes the authority of the President to represent the association in matters pertaining to the Association. The names of the many distinguished Past Presidents provide support for the current president but also look over his or her shoulders to ensure the goals of identifying preventable deaths, continuing education, liaising with like minded groups, fostering good public relations and efficient management on behalf of its members are always at the forefront of the president’s actions.